Do some months have significantly different stock market returns than others? I am not so sure, but many investors believe that October will be the bad month for stock markets and January will be better with higher than average return.

Is it true that we can time the market base on calendar months like “Sell in May and go away “, buy-in December for Santa Claus Rally “ and  January Effect etc…which sometimes may refer to as “ Calendar Effect”.(link)


October: The Month Of Market Crashes? ( from Investopedia.com)

October is a unique month. In the west, October is a transitional month, autumn sliding relentlessly towards winter. It also boasts the only holiday where people are encouraged to dress up, scare each other and extort candy with threats of mischief. October has a special place in finance, known as the October effect, and is one of the most feared months in the financial calendar. In this article, we'll look at whether there's any merit behind this fear.

The events that have given October a bad name span 80 years. 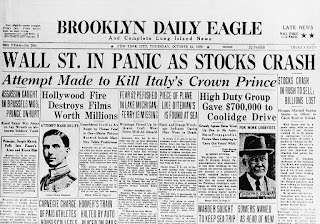 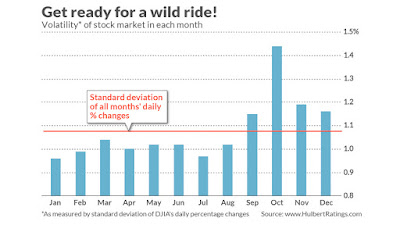 ** We need to understand that volatility does not equal to “Risk”, it is simply a sudden price movement due to certain bad news or events that trigger the huge swing of the stock’s price. The price movement might just be temporary or trigger a longer-term economic effect and lead to a recession. The risk should be the underlying business that could not sustain the “shock” or prolong bad economic situation which resulted in a "permanent loss " of capital.

Never confuse risk and volatility….A Roller Coaster Is Only A Ride (from reuters.com)

Some long term data seems to contradict to what we believe, in fact, if we look at below chart, it seems that September was the worst performance month for DJ, for 100, 50 and 20 years respectively. 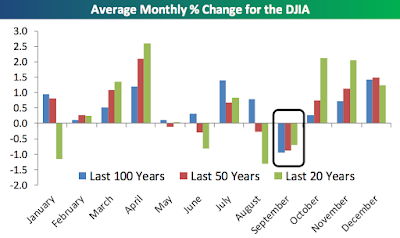 What Is The Best Month To Buy Stocks? ( from startbuyingstocks.com)

Market returns up and down randomly and you will need a crystal ball to tell you which month to buy or sell, I think we shouldn’t buy or sell base on months but on stock’s “fundamental valuation “ instead. If any month’s return is higher than others, I think that’s just by chance and statistically bias. As I repeatedly mentioned, buying during crisis still is the best, regardless of which month to buy.

“The big money is not in the buying or selling, but in the waiting.”  - Charlie Munger   “The stock market is a device for transferring money from the impatient to the patient.” – Warren Buffett   “Compound interest is the eighth wonder of the world. He who understands it earns it. He who doesn’t pay it.” –   Albert Einstein   “If you do the math, and think about it in any long-term way, the people who do well, are the people who compound over and over again. Compound every year. Don’t try and get rich quick. Try to get a decent return and keep doing it.” - Tom Steyer   "The effects of compounding even moderate returns over many years are compelling , if not downright mind-boggling." - Seth Klarman   "A mere 3% annualised edge will produce a 2.4-fold advantage over a 30 year period - the salient lesson that compounding teaches - the power of a long runway." - Allan Mecham   “Remember the power of compounding. You don’t need to stret
Read more

If you are one of the investors investing in the CHN/HKG tech sector, I am sure you would have felt the pinch as the index (iShares Hang Seng TECH ETF (3067.HK) is down by -37% from the all-time high of $22.98 to $14.40 as of writing this article and it was down by -44% at one point. The prospect of these China tech stocks will be challenging, and I don’t think we should expect any immediate rebound from this sector and is going to be volatile since the crackdown from the regulatory on “ anti-monopoly” (Baba/Tencent) to “data security “(Didi) and the recent “education” (TAL/ New Oriental) . We have seen the share price plunged by more than 30-50% and some education stocks almost wipe out with dropping of more -90%. As usual, we will see two different points of view with regards to this tech crackdown and correction, some said it is just a temporary trend and the regulatory is just trying to target some / certain sub-sectors within the tech sector and enact some control or tighte
Read more 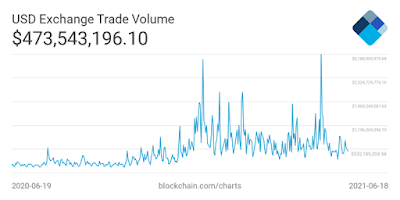 The Difference Between a Stock's Value and Price 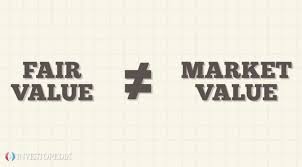 Value is a better measure for investors while price matters more to traders We, the so-called “value investors” often find ourselves trying to resolve the differences between a stock's value and its price. If you have spent any time investing in the stock market, you will know that value and price are two different measures arrived at by different means but most of the time we might confuse and mix up “price as value”.
Read more 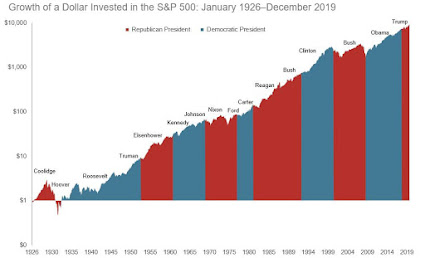 The stock market remains volatile and STI moving up and down with range-bound between 2450-2550. With US Presidential Election and the pending stimulus package from the US government & congress, the market just moving up and down by following this news day by day, for me, it is just like watching “Korean Drama” with popcorn ready. Regardless of who is being elected as next US President, the market will still need to be backed to basic in line with economic performance and recovery from this pandemic. I am sure there will be a “ stimulus package” ready to support this “fragile and zombie” US economy eventually, to keep it “afloat” while waiting for “vaccine” and life to go back to normal. <Image credit : Forbes.com>   Here’s How The Stock Market Has Performed Before, During, And After Presidential Elections <source:Forbes.com>       Stock-market volatility can surge by 20% in the 2 weeks prior to Election Day—but don’t act rash <source:marketwatch.com>
Read more